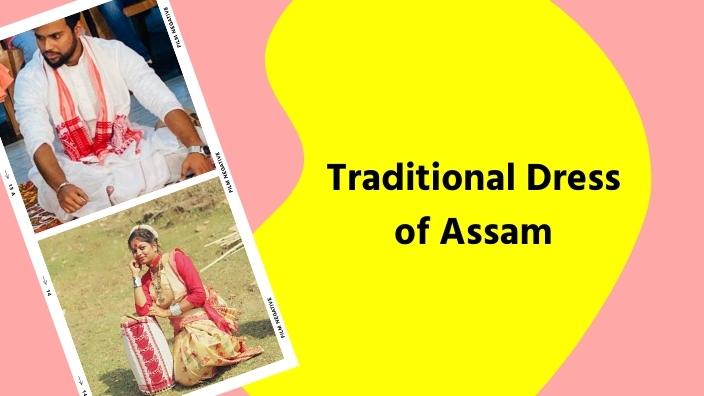 Assamese is one of the most beautiful states of North East India where you can see different variety of natural scenery, lifestyle & dress the Assamese people wear in every part of the state. The state is growing like other states but the people love to carry their old traditions along with the south fashion and it makes the state awesome than the others.

Assam is one of the Iconic and Beautiful states of India. It is famous for the beauty and Tea Garden of India. Assam has 7 National parks and 16 Wildlife Sanctuaries and proposed two Wildlife sanctuaries. In Assam, there are several types of religions that celebrate their festivals energetically and unitedly.In Assam, there have lavishly elegant dresses that are found only on this land. Assamese people were excited to celebrate Bihu. Assam has many oil refineries

In this article, I am sharing traditional Assamese costumes you can see in this state.

Wearing Dhoti is the pride of the Assamese people. It covers the lower body and few people don’t know how to wear the Dhoti proper way. Dhoti and Gamusa are the native and respectful dress of the Assam.Gamusa is a rectangular piece of cloth and white in color with red embroidered on both sides. The people of Assam used Gamusa to show respect and gratitude. They carry Gamusa carefully and sincerely. Gamusa is also used as Loincloth by a Bihu dancer.

The men of the Dimasa tribe wear Sgaopha or Phagri which is too important for this Tribe’s people as a symbol of pride that they carry in their name. The Sgaopha or Phagri is yellow or green in color, but is also white with red thread wear by the grooms.Rigdo is a kind of little muffler that they carry.Risha and Gaintho are the Dhotis that are in long length. Along with  the women’s of this tribe wear Rigu which is long piece of fabric that is standard material than that of Mekhela.Their way of dressing style is quite simple and they know how to carry with Graceful manner.Bathormai is a kind of Rigu that has only one design of the whole piece of cloth.

The Bodo’s men of this Tribe wear Gamusa similarly as the common dress of Assam. The people of this tribe wear Khorom  as their footwear and made up of wood. They used Bodo Gamusa to cover the body waist down to the knee and the upper side is to kept bare. The women of this tribe wear Dokhna as their dresses which like cloth that they wrap around their body and run right from the chest and down to the ankles. Similarly, Dhokna is made up of various bright colors and patterns, and Agor. Without Agor Dhokna is regarded as a bridal dress and is called Salamatha.The people of this tribe have become mastered of the art using edi fiber and produce fine clothes with elegant length.

The men of the Missing people wear the whole dressing style of Assam. They have also worn a Dhoti which is called Gonru Ugon which is the piece of cloth worn from the waist down and the body is covered with a shirt-like fabric called Mibu Galuk. They also Gamusa dummer in its outer side.

On the other hand, the women’s dressing style of Missing people is not fancy type. Similarly, they also wear Mekhela Chador called  ‘Yakan Age- Gasa whose color is black. They wear bright blouses in cokour at wedding.

The Rabha people follow their traditions fluently and have a unique sense of dressing when it comes to the women dressing style. The men of this tribe have followed the common dressing style of Assamese people Dhoti and Gamusa. The dressing style of women of this tribe is called Koum Kontong which is a skirt-like fabric with exquisite tribal; patterns. They wear Kambang in their upper body. They wear belts were commonly called Labok and tied around the abdomen. They had hidden magic in that they are capable of making embroidering things. The North East is a land of mystery where various beauties, distinct styles, and unexplored traditions are created.