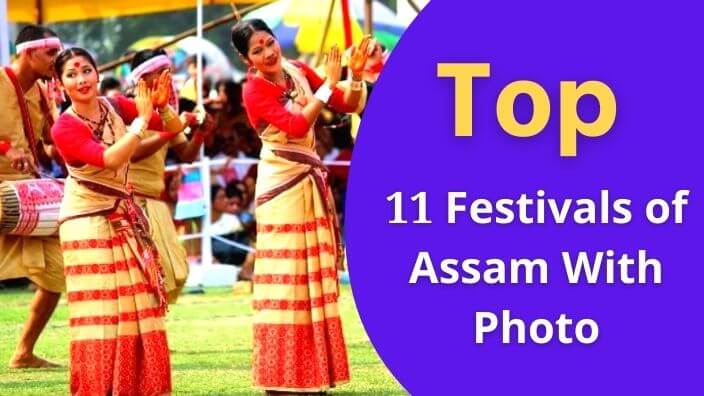 The  Indian subcontinent's easternmost state Assam is full of color and diversity, which is express in a series of festivals held throughout the year by different tribes.

Assam is home to a long procession of the most vibrant festivals, which are full of zeal, compelling, stunning, and representing true secularism, thanks to the perfect fusion of ancient heritage and rich pride of tribes and sub-tribes spirituality.

The aim of these festivals in Assam is to bring together all the people who help with the accommodation and the feeling of being together that is characteristic of all festivals.

In the Assam state, Bihu is one of the most important festivals. It is celebrated at 3 different times of the year in 3 different forms

(Kati and Kongali Bihu are two different names for the same thing.)

Rajni Gabra is one of Assam's most popular and widely praised festivals celebrated by the Dimsa tribe. This is a socio-religious festival celebrated as an opening festival before the start of a new crop.   It is celebrated during the day.

The Bodo and Kacharis tribe of Assam celebrates the Baishgu festival in the middle of April. The Bodo tribe holds this festival in the springtime, as the new year arrives. The festival is celebrated at the same time as Bohag Bihu

The Rongkar and Chengkan are the two important festivals celebrated by the Kaabis who is a native tribe living in the Karbi Enlong District of Assam.

Rongkar is a spring festival that takes place in the month of April at the start of the year. The festival often represents a rainbow of colors, and it is held to honor various deities, both male and female, for the benefit of the whole village. The main purpose of this festival is to prevent people from contracting diseases or being affected by natural disasters during the year.

But in this festival, the women are not allowed to enter the worshipped area during the festive hours, which is an oddity

The Majuli festival, which takes place on the banks of the Brahmaputra River In Assam, is one of the beautiful Assamese festivals you should not miss. Majuli is known for its serene and tranquil natural beauty which also makes this festival.

The most important aspect of this festival is the unification of various ethnic groups under one roof. It exemplifies their history and heritage coming back to life. Special activities are held around the clock, with plenty of opportunities for the general public to participate.

In the Tinsukia district of Assam, there is a place name Lekhapani where the Dihing Patkai Festival is celebrated on a special day of January month in every year.

variety of Ethnic fairs, tea heritage tours, golf, wildlife excursions, adventure sports, and down lane trips to World War II cemeteries and Stillwell Road (once en route to the golden land of Myanmar Was used as) are all part of the Dehing Patkai Festival.

This is the Dewaris' most beautiful spring festival, and it is a time of great excitement in Assam. The Details are one of the four divisions of the Chutias, who were once considered to be part of the great Boro caste.

Bachho is a spring festival dedicated solely to the goddess of ‘Baitho,' who is extremely powerful. The festival is celebrated with pomp and grandeur by the Rabha community of Assam, which does not have its own major festival.

The Ambubachi festival is held every year during the monsoon season at the Kamakhya Devi Temple in Guwahati. The festival takes place over a four-day period. It also highlights the tantric and peculiar culture that exists in many parts of Assam and is widely discussed. People tell stories about Goddess Kamakhya going through her menstruation for the first three days of the festival, according to legend. After the said day has passed, Goddess Kamakhya is cleansed with water and milk, and the temple's doors are opened to welcome devotees who come to worship Goddess Kamakhya.

The Elephant Festival is a significant event organized by the Government of Assam's Forest Department and Tourism Department. It is held every year in Kaziranga National Park to promote Asian elephant conservation and protection.

Various games, as well as cultural performances by domestic elephants, are part of the festival.

The Assam Boat Racing and Rowing Association, in partnership with the Government of Assam's Department of Tourism, hosts the Brahmaputra Beach Festival on the sandy beach of the mighty river Brahmaputra. This annual festival sees an increase in a variety of cultural activities as well as adventurous participation in sports by the locals.